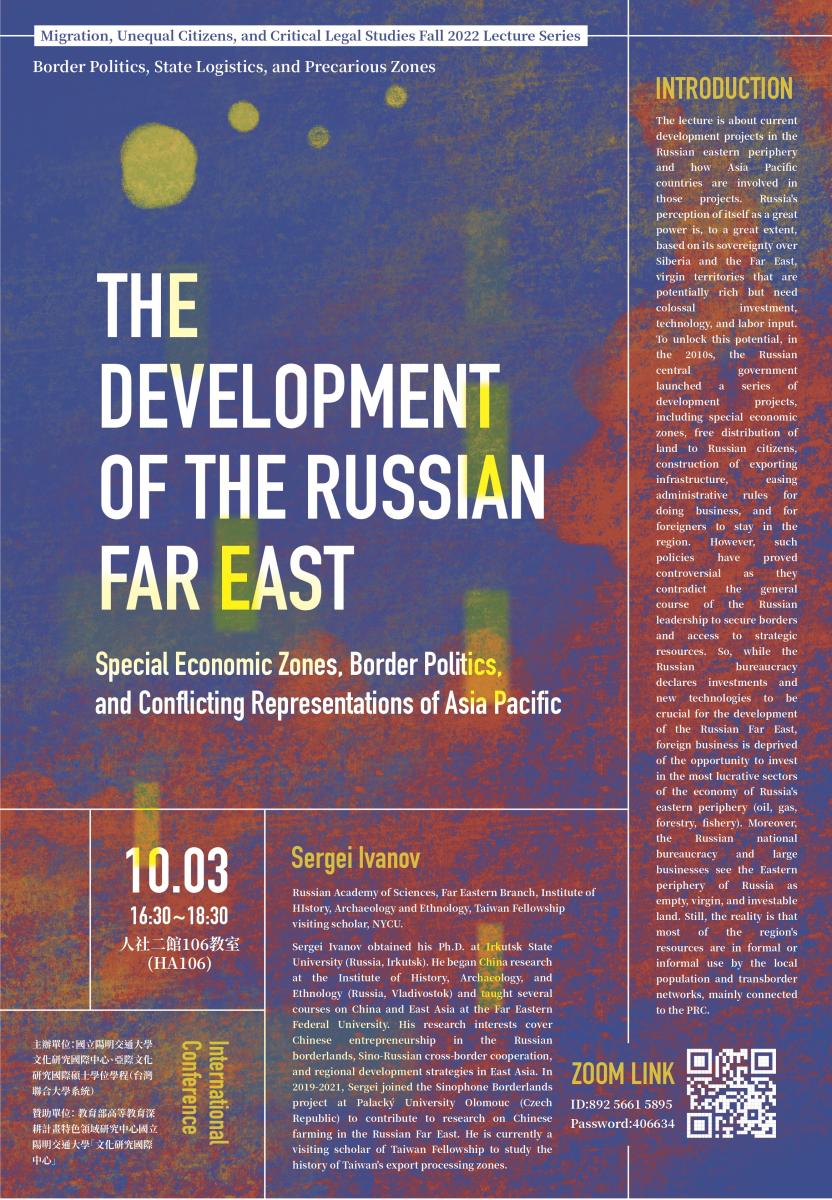 講者自介Bio： Sergei Ivanov obtained his Ph.D. at Irkutsk State University (Russia, Irkutsk). He began China research at the Institute of History, Archaeology, and Ethnology (Russia, Vladivostok) and taught several courses on China and East Asia at the Far Eastern Federal University. His research interests cover Chinese entrepreneurship in the Russian borderlands, Sino-Russian cross-border cooperation, and regional development strategies in East Asia. In 2019-2021, Sergei joined the Sinophone Borderlands project at Palacký University Olomouc (Czech Republic) to contribute to research on Chinese farming in the Russian Far East. He is currently a visiting scholar of Taiwan Fellowship to study the history of Taiwan's export processing zones.

活動簡介 Short introduction of the lecture： The lecture is about current development projects in the Russian eastern periphery and how Asia Pacific countries are involved in those projects. Russia's perception of itself as a great power is, to a great extent, based on its sovereignty over Siberia and the Far East, virgin territories that are potentially rich but need colossal investment, technology, and labor input. To unlock this potential, in the 2010s, the Russian central government launched a series of development projects, including special economic zones, free distribution of land to Russian citizens, construction of exporting infrastructure, easing administrative rules for doing business, and for foreigners to stay in the region. However, such policies have proved controversial as they contradict the general course of the Russian leadership to secure borders and access to strategic resources. So, while the Russian bureaucracy declares investments and new technologies to be crucial for the development of the Russian Far East, foreign business is deprived of the opportunity to invest in the most lucrative sectors of the economy of Russia's eastern periphery (oil, gas, forestry, fishery). Moreover, the Russian national bureaucracy and large businesses see the Eastern periphery of Russia as empty, virgin, and investable land. Still, the reality is that most of the region's resources are in formal or informal use by the local population and transborder networks, mainly connected to the PRC.