Sentience Beyond the Human 多物種感知國際工作坊 - Session One

Event title: Sentience Beyond the Human 多物種感知國際工作坊 - Session One

Non-human Personhood across Buddhist Imaginaries: Vegetarianism and the Protection of Sentient Beings in Modern Chinese Buddhism

From compassion to liberation: The ‘new’ vegan movement in Taiwan

Eating Well in a More-than-Human-World: Notes on the aesthetics and politics of food in

Bioacoustics and Recordings from Taiwan

Sentience Beyond the Human was a one-day workshop taking place at Taiwan Contemporary Cultural Lab in July 2022. The first session invited four speakers to talk about their research of non-human sentients in various contexts. Dr. Francesca Tarocco is a Professor of Buddhist Studies and director of THE NEW INSTITUTE Center for Environmental Humanities (NICHE) at Ca’ Foscari University of Venice. Her presentation was titled “Non-human Personhood across Buddhist Imaginaries: Vegetarianism and the Protection of Sentient Beings in Modern China.” Gina Song is a PhD Candidate at the Centre for East and South-East Asian Studies at Lund University. She presented “From Compassion to Liberation: The ‘New’ Vegan Movement in Taiwan.” Dr. Francis Maravillas is Assistant Professor of Critical and Curatorial Studies of Contemporary Art at NTUE. He introduced “Eating Well in the More-than-human World: Notes on the Food Aesthetics and Politics of Food in Contemporary Indonesian Art.” Artist TziMei Li presented her experimental project at Taiwan Contemporary Cultural Lab in 2021, called “The possibility of feeling with non-human beings.” Dr. Yenling Tsai is associate Professor from the Department of Humanities and Social Sciences at NYCU. She was the moderator of the first session.

Non-human Personhood across Buddhist Imaginaries: Vegetarianism and the Protection of Sentient Beings in Modern Chinese Buddhism

Francesca Tarocco investigates the archive of Feng Zikai, illustrating the particular moment in early 20th China that could be termed as “vegetarian activism.” Tarocco argued that his approach creatively probes the premise of humanism. Though his daughter mused that Feng was not “a serious Buddhist”, in fact, he worked tirelessly with his mentor Master Hongyi (弘一法師) on the project of The Preservation of Life. During that time, Hongyi and Feng attempted to place the historical Chinese cultural forms within modernity in contrast to the May 4th movement that embraced Western modernization wholeheartedly. The cartoons in The Preservation of Life represent Feng’s artistic creation, usually juxtaposed with selected texts by Hongyi. Feng continued working on the text after the death of Hongyi.

Tarocco argued that Buddhist practices such as ​​vegetarian diet (素食) and liberating animals (放生) are different from Western ideas of nature and animal rights. Importantly, before the 19th century there was no semantic equivalence of the term “nature”, the term for an ordered totality of things in contrast with culture. Furthermore, during the first decades of the 20th century, Buddhist activism replaced the role of Confucian order. Many buddhist associations conducted ritual practices and leading monks were active in promoting vegetarianism, including Yinguang, Dixian, and Yuanying. One interesting case, perhaps one of the most influential examples, is that of Lü Bicheng (呂碧城), an accomplished poet and  ​committed buddhist. Her writing includes ci – often with non-traditional topics – newspaper articles, and also a book about vegetarianism, The Light of Europe and the United States. The book aims to introduce the history of vegetarianism and animal rights in Europe and America, as well as animal activism in China. Lü also criticized England’s attempt to export beef to China, which Tarocco found still relevant today.

The Preservation of Life explores Buddhist teachings of non-killing (or husheng 護生), focusing specifically on how humans treat animals, and how human beings and animals flourished with each other. Tarocco used one example in the book that questioned the distinction of human and animal with Feng’s illustration of the visual similarity in human’s flesh and the meat of animals. She then concluded that in the early 20th century in China, by learning from and applying the Buddhist teaching, intellectuals such as Feng Zikai and Hongyi attempted to view the world as a totality without separating human beings from the sentience of other life forms. This idea seems prophetic in the current environmental crisis.

From compassion to liberation: The ‘new’ vegan movement in Taiwan

Gina Song focused the cases in Taiwan’s context when humans recognized the sentience of animals. She begins with the history of the animal advocacy movement. The earliest argument can be traced back to Buddhism or Pythagorean thought. Then Henry Salt can be viewed as one of the pioneers who advocated animal welfare and vegetarianism. The movement in contemporary times is strengthened by the so-called Oxford Group or Oxford vegetarians. Peter Singer’s Animal Liberation and Regans’ The Case for Animal Rights added ethical stands in the movement. Sue Donaldson and Will Kymlicka later extended the argument to a political theory perspective. Song then introduced nuances among the terms such as animal welfare, animal protection, animal liberation, and animal rights. These terms can be taken as a spectrum. Animal welfare/protection asks for bigger cages while animal liberation/rights seeks no cage for animals at all. One core debate in the animal advocacy movement is about speciesism, which means that we recognize the sentience of other life forms yet we assign different values to them.

These ideas are formed in the western tradition, what about (East) Asian? Song asks. Mercy and compassion for animals are inherited in the Bhuddist and Daoist thinking and vegetarianism is also prevalent in this part of the world. She takes examples in Chinese language, many expressions related to animals have negative connotations. Following the cues from linguistics, she found that The history of the animal advocacy movement in Taiwan is influenced by the translation of Peter Singer’s publication in 1996. Though the Animal Protection Association of the ROC was founded in 1960, the movement became more active in the 90’s after the lifting of martial naw. Many animal advocacy organizations including Animal Protection Association have been successful in making legislative changes regarding animal welfare since the 90’s, yet the inclusion of animal protection into the Taiwan constitution has failed earlier this year. Despite the legislative failure, many consumers are learning how to practice animal welfare and protection by being aware of their animal meat and product consumption. Song took one example of veganism in Taiwan. The first wave was the New Vegan Life Movement in the early 2010s and the second wave came with the new generation of animal advocates such as The Taiwan Animal Equality Association and Kindness to Animals which is focusing on street activism, making youtube channels, and opening vegan restaurants.

Unlike the early animal advocacy groups, these organizations changed the paradigm of mobilization and protest, Song argues. They redefine their relationship to animals by not consuming fellow sentient beings. Being part of this vegan movement, vegan fair plays an important role in providing a space for materializing and practicing this way of living. With materiality, these fairs showed various alternatives of meat and dairy products. Song thinks by normalizing vegan and plant-based living, these fairs also shift the image of vegetarianism that is usually associated with religion. Although the population of meatless diet takes up 13% Taiwan’s population, they are not always considered animal welfare as part of their practice, which might create obstacles for advocates of animal and environmental justice. Song concludes her session with the three levels Qian Yong Xian explains in his preface of the translation of Marc Bekoff’s Encyclopedia of Animal Rights and Welfare. The advocate for animal rights operates in recognizing sentience of other life forms, in including these non-human animals in public affairs, and in transforming the society by creating a just society for all sentient beings.

Eating Well in a More-than-Human-World: Notes on the aesthetics and politics of food in contemporary Indonesian art

Francis Maravillas began with two quotes from Jacques Derrida. One is “hospitality is ultimately ‘an art and a poetics’, even if ‘a whole politics depends on it and a whole ethics is determined through it.’” It grounded his thinking about the entanglement of the human and non-human world with the encounter of food ecology. His exhibition Bruised Food: A Living Laboratory, co-curated with Marnie Badham was a responsive quest to the thinking. He asked: “how have artists in Indonesia evoked the complex and precarious or bruised ecology of food?” One entry point pertains to the theme of this edition of Documenta, Lumbung, a term for shared rice barn in Indonesia community. This collectivity and generosity also echoes the exhibition Gotong Royong: Things We Do Together at Ujazdowski Castle Center for Contemporary Art in 2017. Gotong Royong is a term for cooperation and has been promoted by the state to reinforce nationalism and modernization.

Maravillas followed up with a project by artist Elia Nurvista, who is a founding member of Jogja-based artist collective Bakudapan Food Study Group. Her performative project Rijsttafel recreated the dining table of Indonesian food influenced by Dutch colonial legacy. Another performance Maravillas introduced is Masya Allah Transgenic by Agung Kurniawan in Jogja Biennale 2013, addressing the issues of globalization and sovereignty of food. The performance used traditional praying rituals, the traditional Indonesian food presentation transformed into maps, and the texts by president Soekarno in 1952 about food sovereignty. The third artwork presented was an on-going performance by artist Mella Jaarsma, I Eat You Eat Me. Inviting participants to sit face to face and support a thin table top by their thighs, I Eat You Eat Me requests them to feed each other. This work showed intimacy, care, and power dynamics in the process of eating and being fed. Maravillas suggested.

Bioacoustics and Recordings from Taiwan

TziMei Li shared her art project last year, in the Taiwan Contemporary Cultural Lab. Drawing from her past focus on sound, she began the presentation with a question: how do we communicate with plants, particularly on how do we listen to plants? In order to “listen” to plants’ sound, many scientists have already attached sensors to plants and plants did respond to human’s language. However, she started to wonder: why did we assume plants “speak” to us in the range that humans’ ears could perceive, since our audible spectrum is so limited? So the project changed to investigate what kind of sound plants perceive. Sound is the frequency in the air. With her research, Li found above the ground, plants can sense the sound while the root perceives the level and directions of vibration in earth. In order to feel together with plants, Li categorizes senses into various aspects such as time, frequency, spatial relations, and so on. She also found a case of plant’s communication enabled by mycorrhiza and considers what sound these plants’ cells heard when the signals passed through the cell wall.

Based on the research, Li found that feeling with non-human usually involves the surpass human sensations’ limitation. To achieve this goal, it is necessary to design systems that are able to sense in either a micro scale or a macro scale. She tried to imagine what sound grass hears when the ants are crawling nearby. She and her team buried the contact microphone in soil to capture the sound of ant’s walking and tagged the microphone Fushou snail to record the ambient sound. After collecting these sounds in the micro-system, Li attempted to imagine the sound of the macro-system, for example the sound of CO-2 emitting to the atmosphere. She concluded that it is quite impossible to surpass human senses’ limitation - but how to create a space to make sensing the unsensible possible lies in our hands. 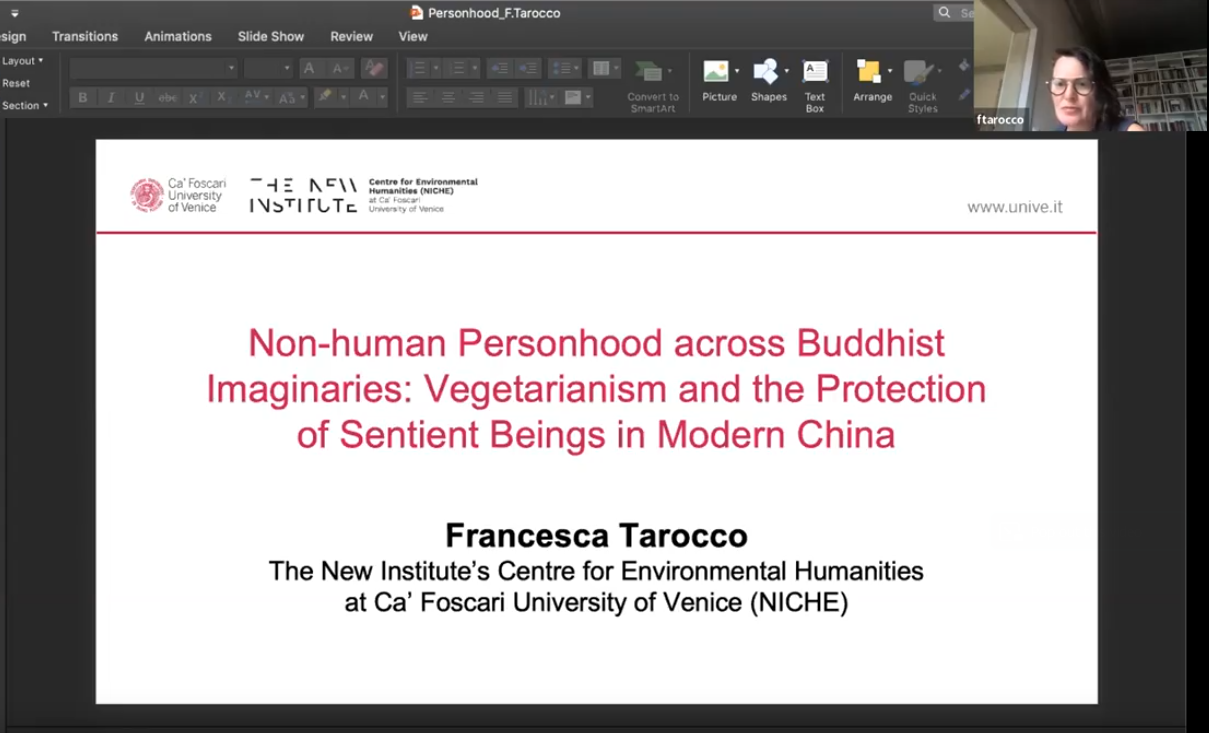 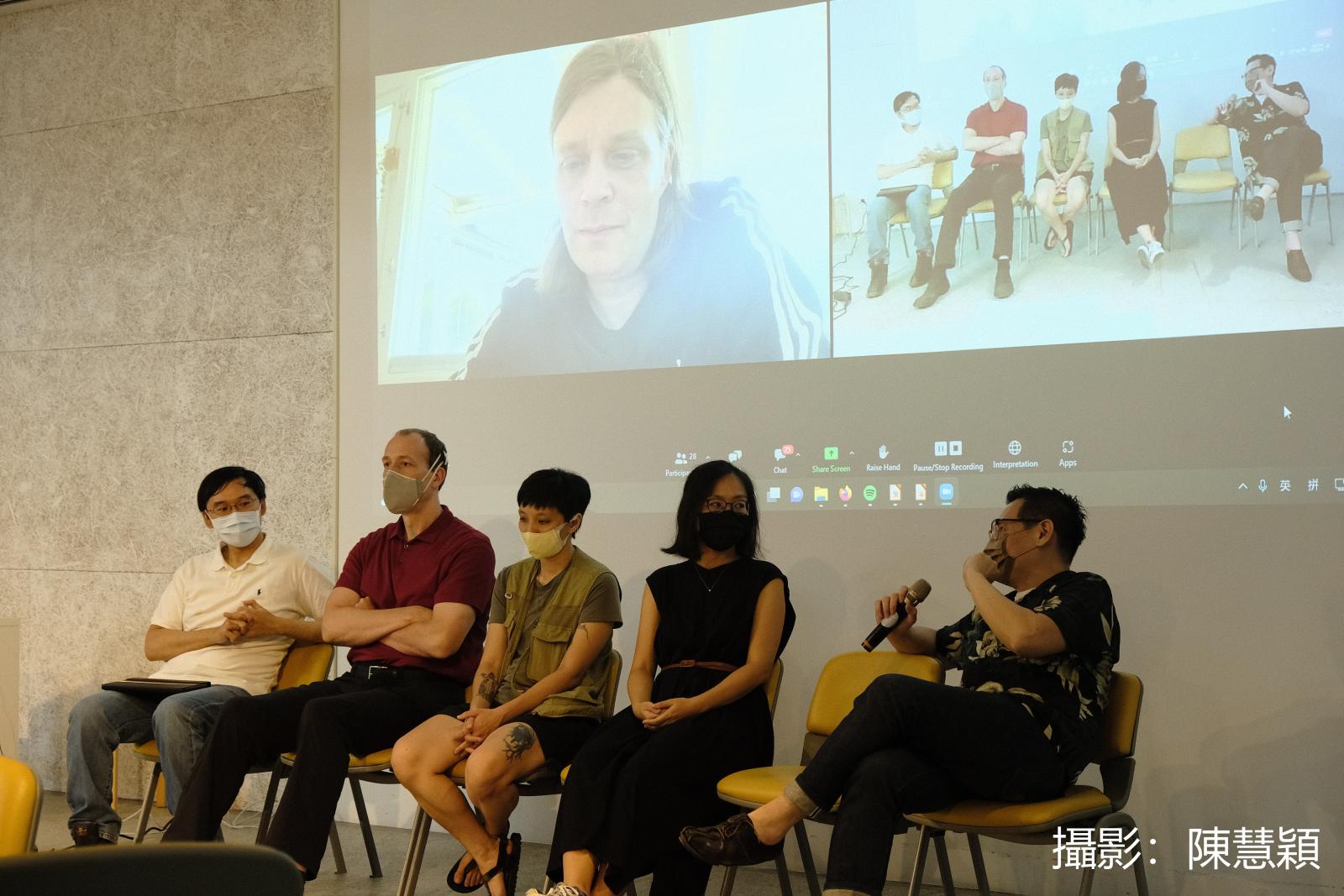 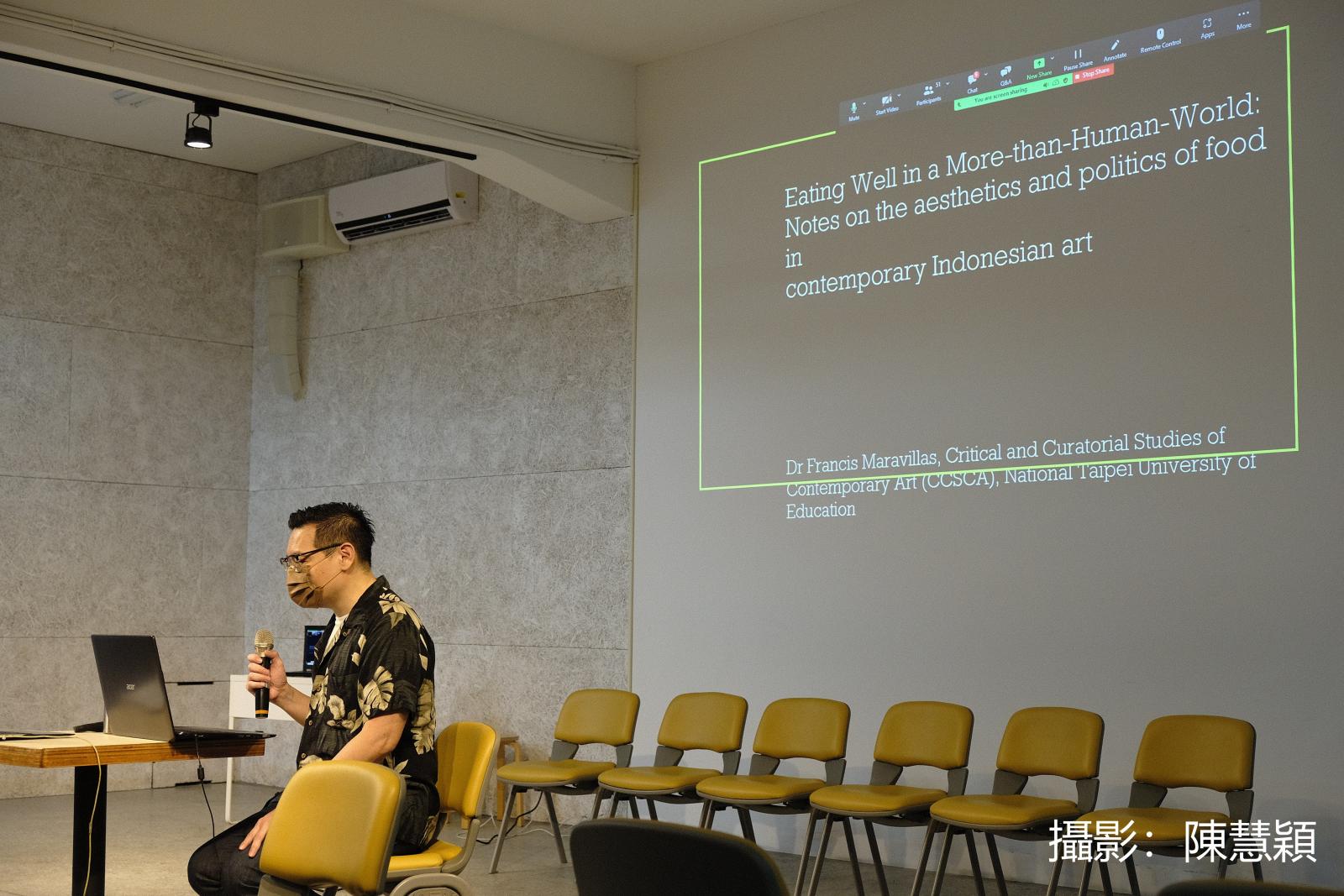